Contains light spoilers for It.

This isn’t a review of the new It movie. With the millions of reviews out there, I don’t think writing one more will help anybody. Instead, I want to talk about a particular scene from the book that is sorely missing from the movie.

No no no, not THAT scene.

I’m talking about the standpipe. In chapter nine of Stephen King’s book, Stan recounts to the loser’s group his personal confrontation with It. Stan tells them he went to a park to go birdwatching, passing by the standpipe tower. On his way back home, he decides to investigate the thing. 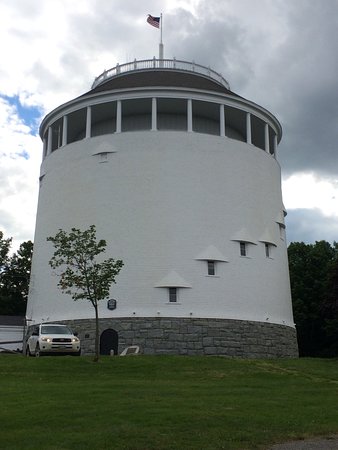 This photo of SK Tours Of Maine, LLC is courtesy of TripAdvisor

As it would turn out, a few kids drowned in this standpipe some years back, which is why there’s a padlock on the door. Strangely though, Stan finds this lock has been blown off, and the door is wide open.

As he enters the standpipe, he can hear calliope music, and he can smell the popcorn and cotton candy of a carnival. But after climbing a few stairs, he hears something else: squishy footfalls, as of soaked rubber boots. And he can see odd contorted shadows on the walls. Something is coming down the stairs. But at that moment, he realizes that the door behind him is closing, leaving him alone with something creeping closer in the pitch blackness.

Sound familiar? Then you read the book. Unfortunately, this scene is missing from both movie and tv adaptations of It. It’s a short scene – only eight pages, minuscule by King standards. Practically a throwaway. And it is. It was thrown away. But it shouldn’t have been.

If you’ve read the book or seen the Tim Curry It, you know that shortly after receiving a phone call to come back to Derry, adult Stan kills himself. This isn’t quite a spoiler – it happens first thing in the novel. Straightaway we learn that Stan encountered something so terrifying, so mindnumbingly horrible that rather than face it again, he ends his life. We’re left with the nagging question: what happened?

Well what happened in the new movie is a creepy painting came to life and tried to eat his face. Creepy I guess, but I didn’t get the sense that this would destroy him. I mean Beverly saw the deadlights, and she’s going to come back to Derry in 27 years.

Which brings me back to the standpipe. Stan encountered something in that standpipe. He didn’t see it, but he heard it, and he smelled it, and he knew he would feel it if he didn’t get out that door and away from it. But the door is locked, and he’s trapped in the dark.

The visual imagery is sparse in this scene. We see some shadows that don’t quite move right, but that’s where it ends. The door closes, and we’re trapped without sight. The imagery of this scene goes beyond sight, to smell, hearing, touch. And it’s scary. We can understand that this is something horrific that happens to Stan. We understand then why he slashed his wrists at the beginning of the book.

So why was this scene left out of the movies? Again, it seems like a throwaway. But it’s not. When Stan kills himself in the movies, he seems like a coward, a wimp. He couldn’t take what It dished out, but the others could. But in the book, the others didn’t experience what Stan experienced in that standpipe.